How to Respond on MLK Day?

How many Americans have been killed by cops? There is no complete data set (data is kept on police fatalities), but this map is trying to capture the numbers. It is attempting to gather the data and record the lives lost to police violence in the United States since the year 2000.

I am a Christian. I am not an anarchist. I am not anti-police. I believe we are called to obey the law as long as it does not violate our allegiance to God (Romans 13). We should always respect authority, even when our conscience requires us to disobey it (consider Daniel 3), confident that all authority is instituted by and ultimately accountable to God (Colossians 2, Daniel 2). I believe anyone in a position of power has latent potential to abuse that power, so the existence of good police officer does not negate the possibility of a bad cop and vice versa. The good news is that all injustice on earth will be paid for in eternity. If the unjust do not turn from injustice and find mercy from Jesus now, they will face judgement then. I believe that.

I also believe that the number of police killings of civilians in America is a fatal indicator of deep problems in our society and systems. Our criminal justice system is the largest in the world. It often punishes people preemptively (in the case of police playing judge and jury), disproportionately, and unredemptively for their crimes. Then, the systems further disenfranchise individuals after their release from prison, limiting their access to jobs and the right to vote. I’ve read history, heard stories, and seen the numbers, which indicate that Black Americans and people of color face these concerns at a much higher rate than white Americans, even in today’s society. Black individuals are being killed by police today at the rate of lynchings during the Jim Crow era, while most white people are blissfully unaffected and unconcerned. Social scientists have described these concerns as America’s structural violence.

“During the era of formal Jim Crow, white Americans were as safely disconnected from the lived experiences of black Americans as polls show that many are today. A Pew study last week found that 80% of black Americans polled, preoccupied by the killing of Brown at the hands of Officer Darren Wilson and its aftermath, felt that the case raised important issues about race. Only 37% of white respondents felt that way, due in part to de facto segregation and a majority status that does not require engagement with those outside their own group.

That racial isolation, combined with the negative messages embedded in American culture, create a lack in empathy that allows otherwise well-meaning people to turn away from the plight of fellow citizens. This implicit anti-black bias, present in varying degrees across races, extends to every sphere in American life, from harsher sentencing for black people in the criminal justice system to the likelihood that young men of color with clean records are less likely to be hired for jobs than white applicants with a criminal record.” (full article)

How might the Reverend Martin Luther King Jr. respond to these issues today? 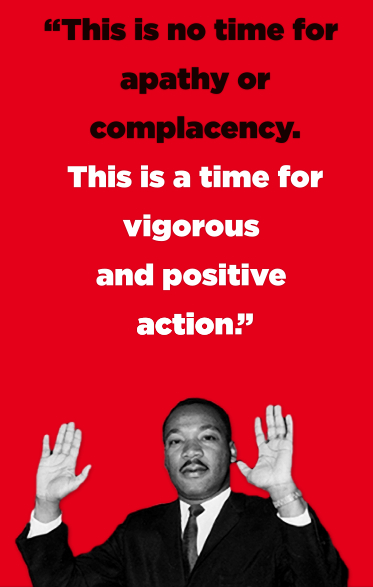 Thanks to bold civil rights activists of past generations, so much has been done already. Yet, facing us today are new incarnations of familiar racial challenges on all levels of American society.

Today, in honor of MLK’s legacy, please sign a petition that colorofchange.org is addressing to President Obama. Join us in asking him to direct the Department of Justice to hold officers accountable for police misconduct and to end discriminatory policies against formerly incarcerated people.