Nancy does her job well. On the stage of dancing women, she is the star. She doesn’t seem like the ideal person to call over for a chat on red light outreach, because surely, a woman who can dance that well must be earning lots of money and won’t want to waste her valuable time talking to one of our team.

But tonight, she’s the only one in the bar that I know by name. She had introduced herself a few weeks before, so now that I’ve returned to the bar where she works, I decide to ask if she’s working tonight. The waitress tells me, “Nancy is in the back getting ready.”

She probably won’t want to talk anyway, I think, before shrugging and telling the waitress, “Ok, no problem. I was just thinking of her.”

“Ok, I’ll tell her,” says the waitress, as she walks away. 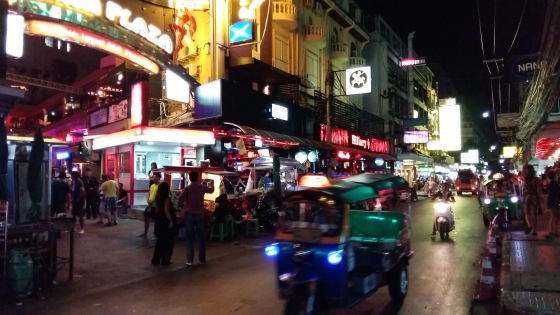 After about 10 minutes, I realize Nancy has come up beside me. She greets me and sits down for a chat. Usually, the NightLight team talks to women to find out how they are holding up in this work. If a woman expresses desire to leave, we can offer her alternatives to prostitution. I knew from my previous interaction with Nancy that she’s been doing this work for 14 years already. She has bounced between bars and red light districts, knows this job inside and out, and has not expressed any interest in leaving. So, God, I wonder in prayer, What should we talk about tonight?

I ask about her daughters. And her heart opens wide.

She shares her homesickness for her daughters, thirteen and two years old, who live in a village far away with their grandmother. Nancy only gets three days off each month, and her days off can’t carry over to next month, so she rarely gets home to see the kids. She sends home money and tries to connect with them on the phone, but she knows that isn’t enough. She calls home often, but her eldest daughter is growing distant. Nancy feels they cannot talk about anything openly any more.  She expresses sadness that her daughter no longer confides in her. She worries aloud that her daughter may get involved with bad friends, and that she, as mom, will have no influence to speak into her daughter’s teenage life.

This story is repeated time and again. Nancy is experiencing what so many women who have come to Bangkok for the sex industry experience. The distance from their families is not only physical, but emotional. Whereas young children still hope mom will return to them, as the children grow, so do the feelings of abandonment. Eventually, most children pull back emotionally to protect their hearts. Mom loses her place and her influence, and both mother and child are affected.

Even when the women leave prostitution to work at NightLight, their children often remain far away in the village. This repeating pattern of child abandonment to extended family is something NightLight proactively addresses with the women we employ, offering child care and scholarship assistance to support a mother in bringing her children to live with her.

Recently, one of my dearest friends at NightLight made the brave decision to bring her son to live with her in Bangkok. She is trying to be the mother she never had. Her own mom worked in Bangkok while she grew up with her grandmother, and until recently, my friend’s son also lived in the same village with his great-grandmother while his mom was far away in the city. Now, they live together – Mother and son, both learning what it means to be a family.

I’m so proud of her for her courageous step to be a single mom in this big city, choosing to stop the chain of parental abandonment in her son’s generation. I’m also glad that the community at NightLight doesn’t leave her in this alone.