I learned a new word in Thai this week – “เมตตา” which means, “kind.”

It was Monday evening, and I would have much rather gone home to do my laundry than gone to the outreach center in the red light area. My laundry was soaking at home in a bucket, waiting to be soaped and scrubbed and rinsed clean. Laundry is so easy. You wash it and rinse it and hang it to dry – and it is clean. Red light areas feel dirty, oppressive, and full of broken people. There’s a real solution for broken people (like me), too… but somehow my laundry felt easier.

I’ve come to meet with a friend who trusted in Jesus back in January. We meet together at the outreach center weekly for Bible study, but this week, we’re going to watch part of the Jesus film together. I thought it would only be the two of us here tonight, but two more friends join us. Instead of sitting in chairs, we stretch our bodies on a plastic mat on the tile floor. Opening my laptop, I begin to play the film. This film is so familiar to me – I’ve seen it scores of times since childhood in six or seven different languages. No matter what language the dialogue is in, I can tell you which part of the story is playing just by listening to the soundtrack.

One of my three friends, who formerly worked in prostitution, tells me she’s seen this film before. The other two tell me the film is new to them.

I never tire of watching Jesus, especially when I’m watching it with friends who’ve not seen it, and I enter their stories to watch the film from their perspectives.

“I’ve heard this story before, but I’ve never seen it,” says one of the women. She is a down-on-her-luck prostitute who comes to church sometimes, and lately, has spent a lot of time at the outreach center.

We watch Jesus in this film. He welcomes a woman who has a reputation for being a sinner. She falls at His feet crying, kissing him, and drying the tears from his feet with her hair.

When people start to look at her sideways for her audacious affection, Jesus tells a story of two men forgiven of their debts. Both were forgiven, but one was forgiven a very large debt. “Which man will love the master more?” Jesus asks.

“The one who was forgiven more,” comes the hesitant answer. Jesus is defending the honor of the woman who is lavishing unabashed love on Him. 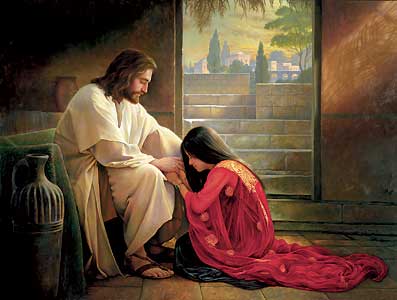 He stands and tells her she is forgiven of her sins. She may go in peace.

After watching a brief section of the film, we turn it off and debrief the story together. “What do you think about this story?”

The woman who is down on her luck pipes up. “God is kind,” she says.