Mundariland Outreach: How many cows for her?

We’ve been closely partnering with a Sudanese evangelist named John Sebit. He’s a fatherly fellow- kind and friendly, yet a fiery minister from the pulpit and in prayer. In recent months, we’ve developed a friendship where he refers to me as a daughter. 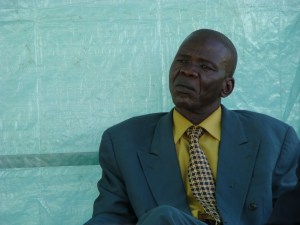 Well, Pastor John Sebit joined us on our recent trip to Mundariland. Early in the trip, he decided he would have some fun by picking on me. The big joke? He thought it was very funny that a Sudanese man had proposed to me at one of our stops along the way, so he teased me about marrying a Sudanese man as we journeyed along.

Well, to perpetuate his fun, he went to another level entirely! When introducing yourself in Africa at a corporate gathering (like a church service), usually you are expected to say your name, where you’re from, and give a brief extemporaneous speech. I introduced myself at the church in Lokweni and gave my wee speech, only to be followed by Pastor John standing up to make an announcement.

“This one you just saw is not married. So, if you are interested, you should talk to me later.”

I’m sure my face was beet red, but I tried to take it as gracefully as possible (while piercing John’s back with an icy glare!).

After the church service, one of the young men from the nearby cattle camp found Pastor John and asked him about my bride price. John told them since I was tall and fair and beautiful, I was worth 500 cows. At least my price was high enough to be outside of the inquirer’s price range! The next morning, John increased my bride price further, ensuring I could escape the village without being whisked off by some half-naked, mud-encrusted, Mundari cattle herdsman!

Moral of this story? Well, I’m not sure it has one. But – if you’re going to have a jokester for a surrogate father in Sudan, at least pick one who thinks highly of you!

Posted by Jennie Joy on August 23, 2009 in Photos, Relationship.