On the Eve of a Presidential Transition

Tomorrow morning, Washington D.C. will be filled with all the pomp and grandeur that our nation can muster as we bid President Bush farewell and inaugurate President-elect Obama to the executive office.

I’ve been known to be somewhat of a political junky – my poor roommate at college had to put up with my daily viewing of the White House Press Briefings after I’d get back from class. (Farewell Dana Perino! Enjoy volunteering with PEPFAR in South Africa! And welcome to the White House, Mr. Gibbs!) But, despite my longing to know the what and why of the workings in Washington, I know that no leader and no policy will lead us to happiness. It’s all a vain pursuit. 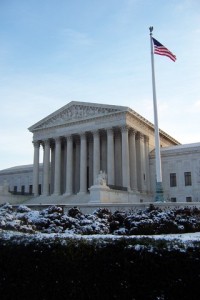 I remember attending President Bush’s second inauguration four years ago. It was a bitterly cold morning, but I hardly noticed – my imagination being so thoroughly captured by the wonder of Washington, the magnificent marble columns, and the prideful air of importance exuded from the politicians I met. Being there felt like being on top of the world, as if I was somehow more important by my association with that place. I felt as if I had ascended Mount Olympus, where tens of thousands of pilgrims just like me had gathered to pay homage to America the great, in this massive festival to freedom and a peaceful transition of power. I was only eighteen then, and I would like to think I am somewhat less impressionable today, four years on.

As I read through President Bush’s farewell speech to the nation this afternoon, my eyes caught this line near the end,

We have faced danger and trial, and there’s more ahead. But with the courage of our people and confidence in our ideals, this great nation will never tire, never falter, and never fail.

Mr. Bush said some fabulous things in his final public address as President, but in those words above, I recognize the same misplaced worship and trust that much of today’s church carries. What do we call it again? Patriotism? National pride? Civil religion? (a post on civil religion worth reading)
For all of the strength, historical significance, beauty, and power represented in the “hallowed halls” of our capital, it is just a city where lots of dedicated professionals work day jobs and make decisions that influence others, both positively and negatively. Neither our leaders nor our system of government is the answer to our problems.
They will tire. They will falter. They will fail. 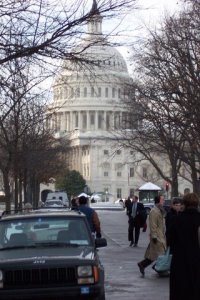 Many people around the world idolize our nation as the hope of the world. Sometimes they place that trust in a government representative, and on other days they plant their trust in the abstract ideals of freedom, justice, and truth for which American stands.
And this all reminds me of Psalm 20 verse 7.
So, tomorrow, as yet another administration dawns, I hope we as the living, breathing, organic Church will stop being so impressed by the big men and power structures of the world. For too long, we have focused on advancing “ideals” through broken systems and mere men. May we cease to be affected by the pomp, prestige, and power pulsating in the atmosphere politic and refocus our gaze on the true source of freedom, justice, and truth. Only there will we find the abundant life we long for, when our trust is firmly planted in relationship with the Source of every good thing.
“Some trust in chariots and some in horses,
but we trust in the name of the LORD our God.”
-Psalm 20:7