Last spring, I sat around a dining room table with some dear friends discussing African politics. After a lull in the conversation, one of them stated matter-of-factly:

“African women are powerful. They are the backbone of Africa, much more so than the men. They do all the work; they raise the children. If they went on strike, Africa would fall to pieces.” 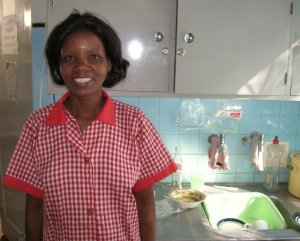 (Shout out to some of these powerful women!)
Eudita Gaba personifies the powerful woman to which he referred. Now fourty-one years old, she has only known a few years of peace in her lifetime. She birthed and raised eight children in the middle of a warzone. Her first son was born when she was only 17 years old. She has lived through four husbands, the last one went insane, abandoning the family that was living as refugees in northern Uganda at the time. Two years ago, after her husband went insane and the subsequent birth of her youngest son, Eudita was suffering incredible abdominal pain. In giving birth to baby Peter, something had gone wrong, and months after the birth, she still could not work. That is when Michele met her.
Eudita was burdened. Five of her children were still young and living in her care, but she had no way to provide food for them without an income. She asked Michele to take the kids from her, sorrowfully explaining her unemployment and health situation, “I cannot carry bricks!”
“Can you still cook? Wash clothes? Care for children?” Michele asked her.
Eudita’s face changed to an expression that said, “What sort of self respecting woman would I be if I couldn’t cook, wash, and care for kids?!”

Then and there, Michele hired Eudita to come live at Yei Children’s Village to care for the children. She began receiving a monthly wage, and she and her children were given a home. 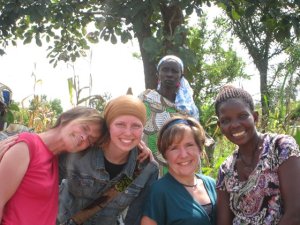 (Christa, Me, Michele, and Eudita)
Eudita works tirelessly as the head mama to our 77 children. She washes clothes, cleans house, bathes children, administers medications, and mediates disputes between the other staff members. She is a servant leader, always willing to pick up the slack for the other staff when they are unable. She truly loves the children, speaking to them gently, disciplining them wisely, and always dealing with them so patiently.

In the past three days since Josiah ‘Doga arrived, she has taken on more responsibilities as well. She became the little baby’s primary caregiver and stepped in to fill the vacancy left when two of our staff (the cooks) moved on to other employment – all of this in addition to her responsibilities as the “head mama.”
As I watched her feeding Josiah ‘Doga last evening- the way she gently spoke to him and lovingly gazed at him- I joked with her about him being her ninth child. She laughed and agreed, “Yes, he is my ninth child.” 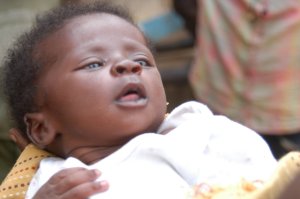 Looking back over her life, I wonder if the life she has lived is one she dreamed of. Probably not. Her path has taken many twists and turns through the years. She has known much joy and sorrow, but each step on her journey has shaped her into the beautiful treasure of a woman that she is today.

Here at YCV, we love and respect her deeply, and we regularly thank God for bringing her to us. She is a model of the powerful African woman to which my friend alluded.Click HERE and HERE for more posts about Mama Eudita.